Fleet safety managers are always on standby. On Aug. 25, Andrea Adeyanju received an urgent message while she was at an offsite meeting. She had to quickly gather her belongings and leave.

It was bound to happen to someone during the meeting, a “boot camp” hosted by Vertical Alliance. Adeyanju and other safety managers at the meeting had been learning how to better protect their companies and drivers by using a web-based training platform, among other strategies.
Adeyanju is safety administrator and human resource manager of Bulkley Trucking, a refrigerated carrier based in Brashear, Texas. An accident had just occurred in Mexico that involved a Bulkley driver. Adeyanju determined the driver was not at fault by watching a video of the event, but needed to get started on the post-accident work right away.
As this was happening, attendee Deborah Clark, director of compliance at Barnes Transportation Services, was reviewing some critical safety events on her laptop. The events were captured by the fleet’s Samsara camera system.
When accidents and risky driving events happen, safety managers spring into action. Sometimes their actions are as simple as assigning an online training course to a driver, or conducting a coaching session.
During accident litigation, plaintiff attorneys will scrutinize a fleet’s training records and safety technologies — or lack thereof — to convince judges and jurors that the defendant is not doing everything possible to operate safely, said Mark Rhea, a fleet safety consultant who has worked for Lancaster, Texas-based Frozen Food Express (FFE) in various safety and compliance roles for 30 years.
During the meeting, Rhea presented data that shows the dollar amounts of jury-awarded verdicts against motor carriers have increased by 335% from 2012 to 2019, and that 70% of verdict amounts are for punitive damages.
Motor carriers’ best defense is to demonstrate their safety culture, he stressed, and using a system that automatically documents training is a “guaranteed winner.”
A fleet that can say, in court, that its drivers are completing monthly training assignments at a high percentage will send a strong message, he said. Some of the most essential driver training topics are speed and fatigue management, he noted, since these behaviors are known to contribute to 27% and 21% of all truck fatalities, respectively.
Documented training is especially useful to show that corrective actions were taken following an incident. If not, plaintiff attorneys will be “looking to see if you had information presented to you that you ignored,” he said. For instance, if a driver is put out of service during a roadside inspection, “what did you do about it?” he asked.
Simply talking to a driver is not enough, he said.
Rhea also stressed that fleets need to enforce distracted driving policies and clarify impaired driving policies so that drivers know exactly what is and is not acceptable. Certain prescription drugs are not conducive to truck driving. “Plaintiff attorneys are looking for that and insurance companies are, too,” he said.
When accidents proceed to trial, motor carriers should respond quickly to information requests by judges and plaintiff attorneys, such as for driver files and employee manuals, said trucking attorney Peyton Inge, partner in Dallas-based law firm Kershaw Anderson. 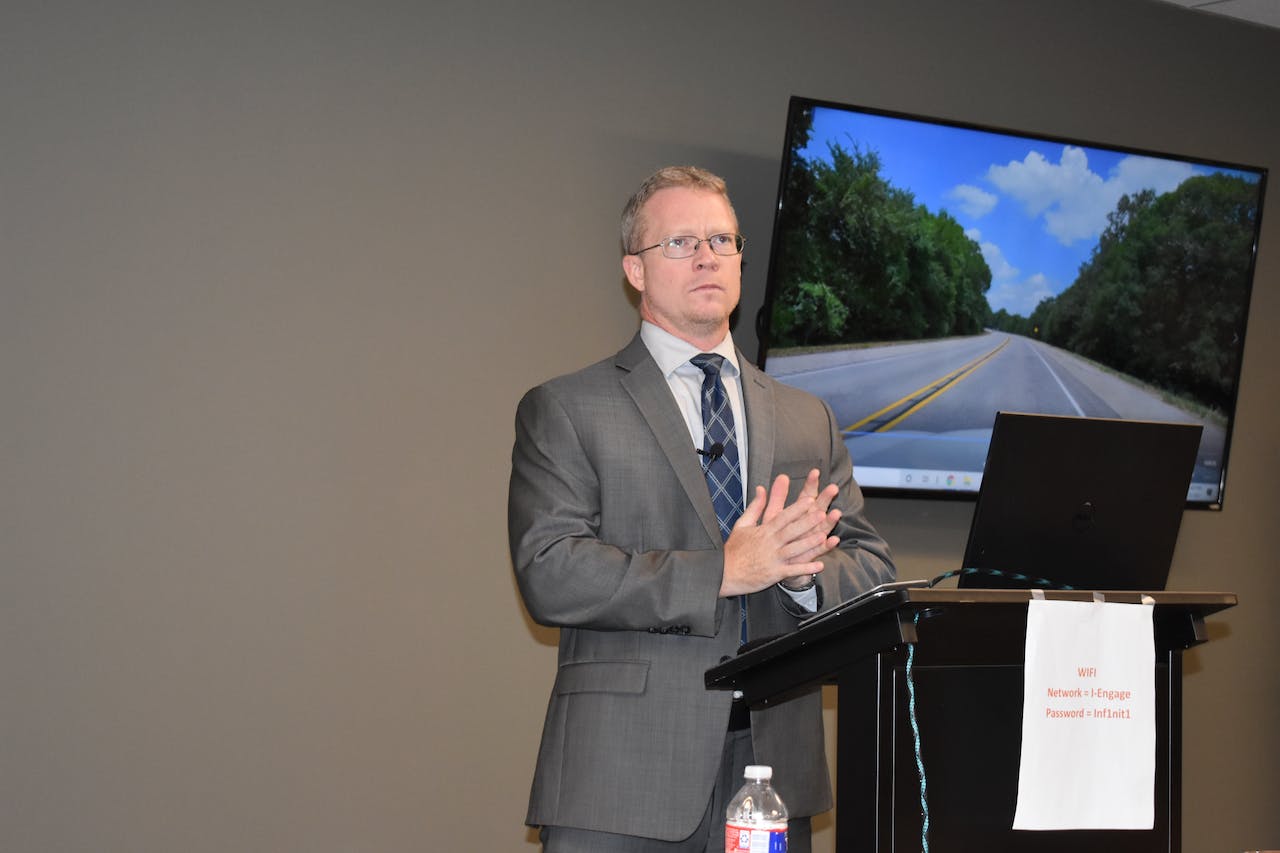 Peyton Inge, partner in Dallas-based law firm Kershaw Anderson, said inward-facing cameras are not helpful in litigation but are useful for driver training.“Avoid stupid fights and save your powder,” he said.
If video of an accident is not available, Inge recommends that fleets pay for a professional reconstruction firm to create a video based on event data captured from the vehicle’s ECM.
During the meeting, Inge showed an accident recreation video that he plans to show at an upcoming trial. The video demonstrates how a driver of the passenger vehicle failed to act in a reasonable manner, he said.
“This is how you win a case,” he noted. “To show how absurd the plaintiff’s case is.”
When documenting corrective actions with drivers, Inge recommends that fleets do not write down concerns they may have, but to only document the steps taken to show compliance with company policy. “If the safety director is saying ‘We’re unsafe,’ it makes it hard to defend,” he said.
“You’ve got to be aggressive and proud of your company. If you put something in writing, it needs to be ‘the glass is half full,” he added. “Make it positive or do a simple termination.”
From a defense standpoint, Inge said he doesn’t like to have footage from inward-facing cameras but recognizes that fleets use the footage to identify risk and train drivers to be safer to avoid accidents.
Oftentimes, footage from inward-facing cameras “shows things that are not helpful,” he said. “From a litigation perspective, I have not seen a benefit.”
Besides offering legal protection, online driver training platforms can save carriers money by onboarding drivers more efficiently and eliminating in-person meetings. 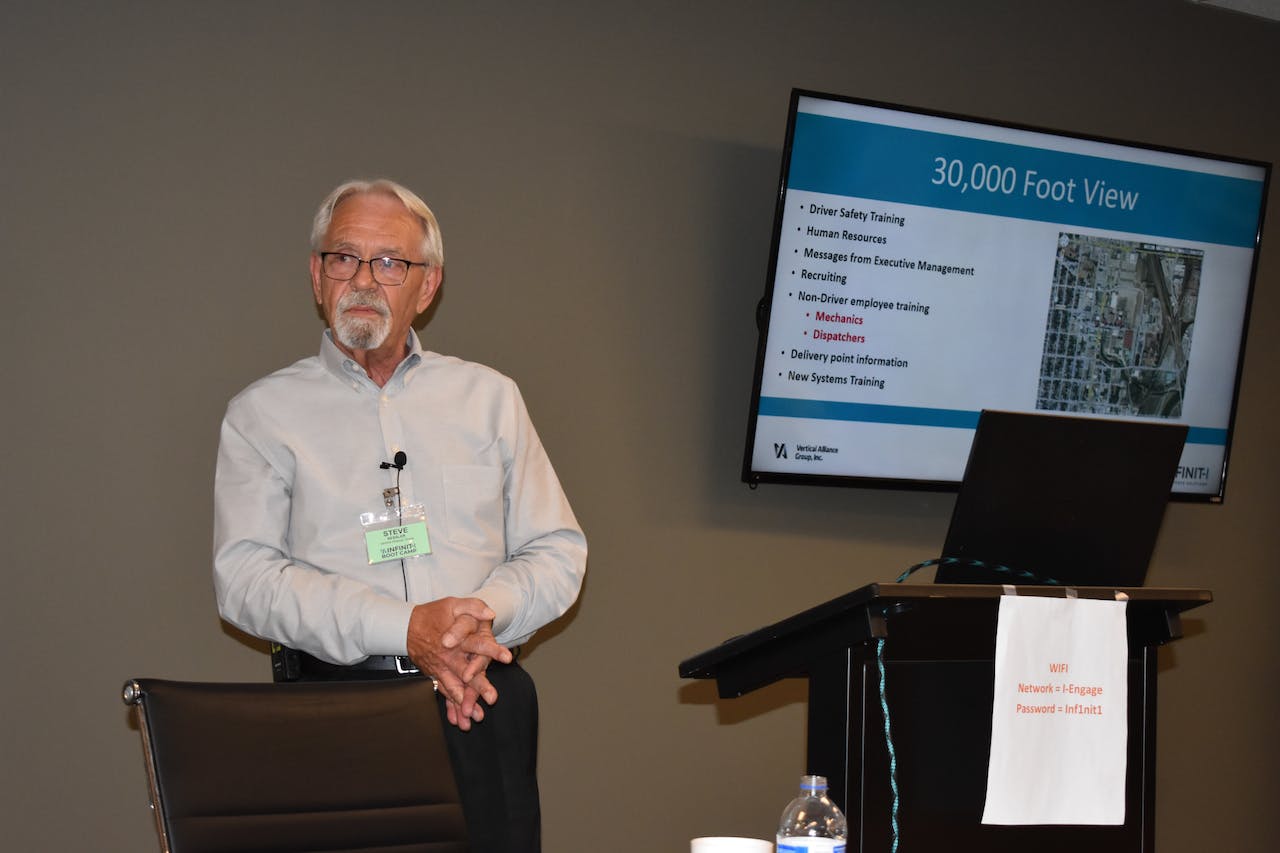 Steve Kessler, market development and support manager for Vertical Alliance, discussed the various ways fleets can use the web-based training platform to improve safety and driver satisfaction.Attendee Pat Landreth, director of loss prevention for Memphis, Tennessee-based fleet Ozark Motor Lines, which operates 800 trucks, told the group of his experience with the Vertical Alliance training platform, called infinit-i, and how he uses other technologies to manage risk and reduce driver training costs.
Ozark uses a hybrid approach for driver orientation training. Drivers can complete training courses online through the Vertical Alliance platform before they come onsite. During the COVID-19 pandemic the company has moved more training online to shorten the amount of time drivers spend at the office to a few hours. Drivers have appreciated the efficiency, he said.
“Regardless of how good you think your orientation is, drivers don’t care. They just want to go make income,” he said. Drivers can complete their orientation training for Ozark online while working for a different carrier so they “never miss a beat,” he said.
Ozark also assigns monthly training to drivers. Most of its content is custom and takes drivers less than 10 minutes to complete. In July, every supervisor and driver completed the assigned topics by the end of the month, he said.
“We are making culture changes at the company,” Landrath said. “We are changing the behavior of drivers and supervisors. Everybody accepts [the training] has got to be done.”
If drivers do not complete the training by the end of the month, Ozark will stop their dispatch, he said.
The company also uses a video safety system from Lytx and uses driver-facing and forward-facing cameras. The driver-facing cameras detect fatigue, distraction and other risky behaviors. Landrath credited the fleet’s Lytx system for changing the culture. “It is the best tool I’ve had in 38 years of trucking. We are monitoring every minute of the day,” he said.
Landrath said that Ozark has seen a reduction in preventable accidents by 48% year-over-year. The company made a decision to double its insurance deductible as of Aug. 1.
“We are going to take on more risk. We feel like we can save money. Now we’ve got to make sure it happens,” he said.
Vertical Alliance, headquartered in Texarkana, Texas, has more than 850 training videos in its catalog that covers many different categories for drivers and staff. The platform also has non-driver training courses for human resources, mechanics, dispatchers and other office staff.

Fleets can also create their own multi-media content such as video messages from executive management, announcements, and training for delivery points, said Steve Kessler, market development and support manager for Vertical Alliance. The company’s client support group assists with these projects and can usually turn them around the same day, he said.